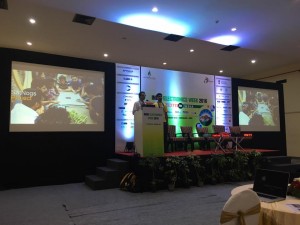 January 12th 2016 saw [Anool] and [Vaibhav] land up in Bengaluru. We were there to curate the “Maker's in India” track at Electronics Rocks Conference the next day. The eROCKS conference itself was part of a larger week long event called “India Electronics Week”. We had started planning for the event since August 2015, when we were contacted by [Dilin Anand] from “Electronics For You” asking us to host this event. Coordinating the logistics, working out the detailed schedule, getting people on board and planning the event took a while, but we were glad that everything looked set a day before the event.

Early morning on the 13th , we made our way to the Bengaluru International Exhibition Center (BIEC), and took charge of the conference room allocated for our track, hoping to start off by 10:00 am. Reaching BIEC in Bengaluru during rush hour is a challenge, so we were asked to wait until 11:00 am before starting for the day. To help us with some logistical support at ground Zero, we had asked our good friends [Pavan] and [Anupama], who run the awesome Workbench Projects maker space in Bengaluru, and they deputed two of their team members to be at our side throughout the day. Thanks, Workbench Projects – you folks rock.

We kicked off the event by talking about our personal journeys as Makers, the story of Maker's Asylum, and how we are excited to be at the forefront of the Maker Revolution in India. But this wasn't about us. We were excited to be able to invite and get makers to come and share their experiences and projects with the audience.

We started off with [Sandeep Patil] and his team from ExploreEmbedded, who showed off their modular, Internet connected LED matrix called Starling. It's an open source project and they are currently raising funds via crowd funding to help fund a production run. [Harsha Muroor] from Teslon talked about Feedoo – an IoT enabled Pet feeder that was developed in collaboration with ExploreEmbedded.

[Arvind Sanjeev] is an awesome hacker and runs DIYhacking based out of Cochin. He talked about how DIYhacking is helping students move away from paying for pre-built, off the shelf projects for their Capstone submissions and instead enabling them to innovate and build hardware by doing their own research. Two of his interns then showed of a couple of very interesting projects that they have built. [Nitin Vasanth] showed off his Brain-Computer-Interface (BCI) based on the OpenBCI board. It uses electrical signals tapped from the skull to control physical objects. And [Mohammed Ibrahim] talked about the OpenHybrid augmented reality system. Finally they showed how both of their projects could be combined to allow a Motor to be controlled using brain wave signals.

Post lunch, [Chetan Velumurugan] showed of some Drones and talked about the work that he has been doing with Agriculture mapping. And [Stanislaw Bobela] gave a presentation outlining the pros and cons of fixed wing drones v/s rotor blades, and how to prepare for the future by adding features like autonomous navigation, parachutes for safety, crash protection among others.

[Vaibhav] chaired the next Panel discussion on “Open Source vs Closed Source”. On stage, discussing this topic were [Neeraj Gupta], [Myshkin], [Anool] and [Nihal Kashinath].

[Vikram Rastogi] from HackLab_in was up next. HackLab is a maker space trying to build a portfolio of projects by teaming up with other makers. They showed off the I2U2 Telepresence Robot which is work in progress, for which they received a lot of feedback from the audience. Also on show was their “Cruize” motorized wheelchair. We had to wait for [Myshkin] to arrive, but in the end it was worth it. [Myshkin] had used simple, off the shelf parts to add electric-assist to his bicycle. He rode 40kms to reach the conference venue, but had to struggle with a flat tire on the way. He gave us a run down on how he did the conversion for Project ButterScotch.

The last talk of the day was by [Abhijit Sinha] who talked about his unique Project DEFY. It’s a maker space he set up in a village just 30 kms away from Bengaluru. The children there have never seen a Computer. He let these children, who knew no English, play with the computers on their own without any instructions. Within a year, these kids were teaching and learning from each other, looking up projects on the Internet, building and improvising, and then sharing and documenting their work. Some of the kids were on hand to tell us about their experiences too. Pretty inspirational.

The second panel discussion for the day was about “Scaling up your Ideas (money matters)”. On the stage were [Mishkin], [Vijay Varda], [Imtiaz], [Somnath Meher], [Pavan Kumar] and [Anool], moderated by [Anupama].

We wrapped up the day with a quick round of thanks, and a truckload of ideas for the future.