Back in January 2014, me and Samata visited MakerFest 2014 at Ahmedabad. At the Makers' Asylum pop up maker space over there, Samata helped make some light-up dresses using LED's.

Ever since then she's been wanting to make some more wearable electronics. Eventually, I asked my friends over at Wyolum to send me a MAKE: Flora Project kit. The kit came with Kate Hartman's book "Wearable Electronics" along with Adafruit's FLORA board, RGB smartLEDs, LED sequins, conductive thread, LiPo battery and charger. Everything to get some nice wearable stuff built. 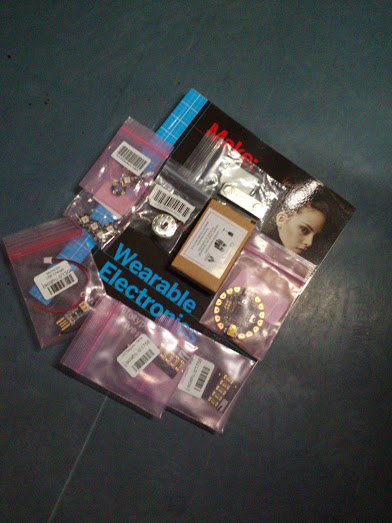 Around the same time, I received our first samples of TinyTiM from seeedstudio - a WS2812B based LED matrix board that we designed at Wyolum. This is a 8x8 matrix of 64 smart pixels that require just one micro-controller pin for 24 bit RGB color, among a couple of other options.

With all of these parts in hand, Samata was getting some bright ideas for projects. The initial plan was to try and build a Belt using the TinyTiM. After some more thought, we changed plans and decided to make a Necklace instead. The TinyTiM is about 120mm square, and seemed a tad big for a necklace, but Samata looked confident to pull it off. Once we made up our minds, putting it together was quite straightforward. We fixed the Flora board and a LiPo battery to some stiff paper using double sided tape. The LiPo connects directly to the Flora board. And three wires from the Flora go to the TinyTiM - [+], Data and [-].

Once the basic design was tested, Samata got out her sewing kit and covered the LED board with red shiny mesh cloth. The red neck band was stitched using buttons on both sides. It took us just over an hour or so one evening to put it together using  one micro-controller board, a battery and a LED board. Couldn't get any simpler.

To run the LED's we used Adafruit's excellent NeoPixels library for controlling the LED's with some simple animations and fade effects. There are just a few parameters you need to set up in the well commented code. We don't have any "Fashion" shots yet, but here's what it finally looks like.