Exploring Electrooculography at the Delhi Asylum

One of the most exciting ideas that’s been explored at the Delhi Asylum recently has got to be Shruti & Naman’s electrooculography project.

Electrooculography is a a fantastic concept that the two stumbled upon during their winter training at college. It inspired them to whip up a quick model to test it out.

The way it works, is by placing pairs of electrodes around the eyes, it becomes possible to measure the subtlest of eye movements. 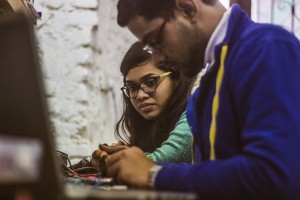 If the eye moves from the centre to either of the two electrodes, the electrodes can ‘see’ the positive and negative sides of the retina. This causes a potential difference between the electrodes. Assuming the resting potential stays constant, the recorded potential is a measure of the eye’s position.

As a proof of concept, they chose to control a robotic arm using the EOG circuit. The plan however is to scale the project up and implement it on a wheelchair. It could be of tremendous use to paralysed patients.

In addition, they also plan to introduce components into the setup that would allow for 3D mapping of the area, letting the wheelchair sense whether it’s advisable to move forward or not. 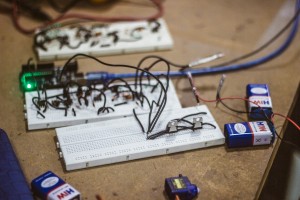 Given the potential of this project, we can’t wait to see Shruti & Naman explore this idea further and hopefully implement their wheelchair prototype soon!